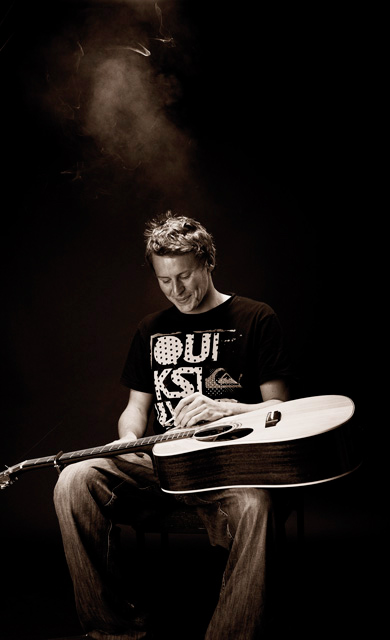 Planning, creative visualisation and technical knowledge are all important for studio portrait photography, but being aware and reacting to a fleeting moment can make the difference between an average portrait and a great one.

A couple of years ago an up-and-coming musician arrived at the Carve magazine office in Newquay, Cornwall for a shoot to accompany an interview in the mag. Ben Howard was starting to get some attention as a live performer, especially in the southwest, so I decided to recreate a live concert in the studio environment. I love shooting bands live, but you are usually only given one or two songs in which to get the shot before being ushered away by security, so it can be frantic and stressful.

Having Ben perform in the controlled environment of the photographic studio, using my own lighting setup, was a great opportunity. And what a privilege to have an impromptu set from a promising new performer in our own office! Obviously we didn’t know at the time that Ben Howard would become a huge worldwide phenomenon, but he was definitely something special.

I placed a couple of lights high and and behind Ben, put  a blue gel on one, and placed the main light with a softbox in front of Ben and asked him to start playing. He played a couple of songs and then stopped for a break. He lit up roll-up cigarette and was chatting to my colleagues who were standing at the back of the studio. I didn’t put my camera down. I could see the smoke curling above his head and, as I had a black background, it was perfectly lit. I waited for the moment. Ben took a drag, blew it out, the smoke curled in the light. Someone made a joke, Ben looked down and smiled. Bang! I got the shot.

Well maybe not bang, just a click, but sometimes you know as soon you’ve taken a shot that you’ve got something special. You don’t have to look at the LCD on he back of the camera, you get a jolt of adrenaline, a frisson of excitement that you can feel in your belly or down your spine.

I worked on it in Photoshop and made it mono with a sepia tone, and I think this really gives it some atmosphere, and a timeless quality that harks back to a bygone age of smoky jazz clubs. It’s hard to define what makes this a good shot. He’s not looking at he camera, but it’s an unguarded moment, and that gives it a real intimacy. Of course this wasn’t the shot I had planned but being aware and waiting for a fleeting spontaneous moment is what good photography is all about.